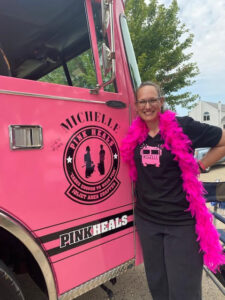 Michelle was initially diagnosed in August of 2014 with Stage 2b Breast Cancer, Michelle opted for the treatment route of a double mastectomy, followed by chemo, radiation & reconstruction. All was well and good until she found another lump in late July of 2018 and was diagnosed again that August with Stage IV Metastatic Breast Cancer. In the 2 years since the metastatic diagnosis, Michelle has undergone numerous radiation treatments and a few chemo protocols. She calls herself *The gift that keeps on giving!*

One of the best things to come out of her diagnosis is the adult scavenger hunt fundraiser “On the Hunt for Pink Trucks”. Launched in April of 2016 with 9 teams, this fundraiser has grown to 28 teams at the last hunt in 2019! Realizing we could not pay everyone back for feeding, caring, and loving our family through the initial diagnosis, this fundraiser to pay it forward was borrowed from a friend and brought to life in Joliet. While we were unable to hunt in 2020, we are hopeful for a return in April of 2021. All proceeds of this event benefit the Joliet Chapter of Pink Heals. It’s a crazy fun night of costumes, hilarious team names, some decorated cars, raffle prizes, and team placement prizes. One of Michelle’s favorite awards of the night is the Spirit Stick topped with a ladybug in honor of ADDISON!” And when you’re gone, who remembers your name? Who keeps your flame? Who tells your story?” ~Who lives, Who dies, Who tells your story ~ Hamilton the Musical ~ 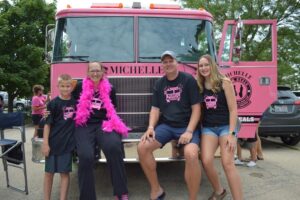 These vehicles do. They tell the stories & keep the flames of 4 outstanding women. These vehicles are living legacies of women who made a difference, who have incredible stories, whose families who would love to talk about them and all they did to inspire others. MICHELLE’s truck? Her story is still being created, and there is a whole lot left to be written! Head of On the Hunt for Pink Trucks 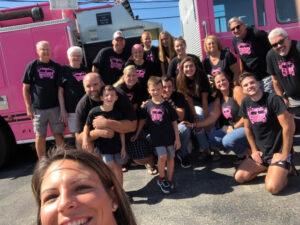